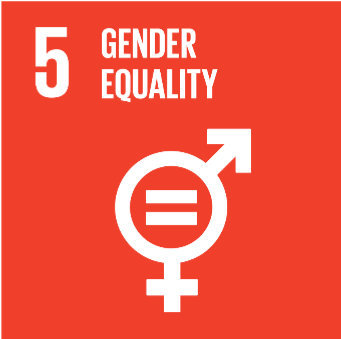 UN member States agreed on 17 Sustainable Development Goals (SDGs) to be accomplished by 2030. The following target is directly addressed by this topic.

Target 5.5: Ensure women’s  full and effective participation and equal opportunities for leadership at all levels of decision making in political, economic and public life.

Gender equality is a human right and a critical component of the United Nations (UN) Sustainable Development Goals (SDGs). Most people are familiar with SDG 5 on gender equality, but some may not realize that gender equality underpins more than half of the SDGs: 9 out of the 17 SDGs make gender-specific references.

Stock exchanges are uniquely positioned to influence their market in a way few other actors can. Exchanges play a central role in the economies in which they operate. Globally, exchanges list over 50,000 companies with a market capitalization of over $90 trillion. In many jurisdictions, the exchange defines, directly and indirectly, what is expected from the companies listed on its markets and the entities transacting through its markets. Policymakers, regulators, investors, and civil society are increasingly demanding greater action on gender equality. Exchanges are well-placed to meet this demand with an influence and a voice across the capital markets ecosystem.

of board seats on G20 listed companies held by women

Companies with higher levels of diversity at the executive level are found to show higher performance than their less diverse counterparts on both profitability and long-term value creation measures*. Besides, companies with more diverse boards and senior management teams demonstrate better environmental, social and governance (ESG) performance including having more ethical business practices, enhanced workplace policies, and stronger community relations*.

Tracking the gender balance of issuer’s boards, along with other related data, provides a useful benchmark for exchanges and other key stakeholders to assess progress in promoting gender equality among listed companies.

The action plan set out below summarises the main areas where exchanges can take action to contribute to greater gender equality. These cover both outward and inward-focused opportunities and are aligned with existing exchange initiatives and operations. In short, it builds on what exchanges are already doing. Each of these action points, together with illustrative examples, are explored in more detail in the SSE – IFC Report on How exchanges can advance gender equality: Updated guidance and best practice 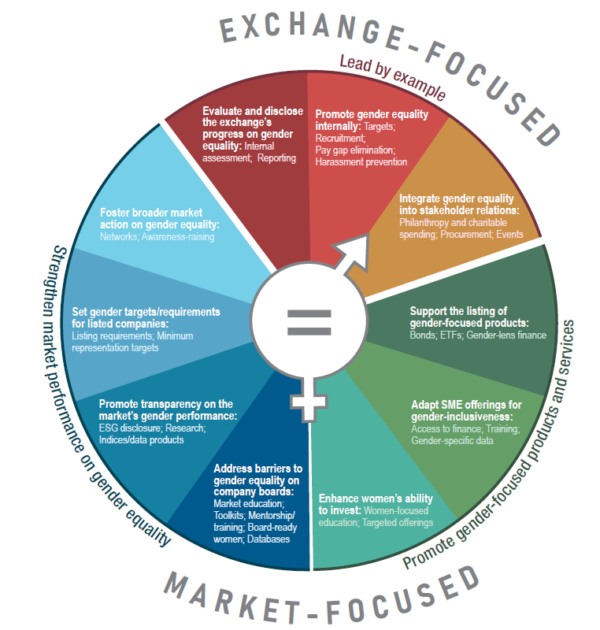 Ring the Bell for Gender Equality

Every year, in celebration of International Women’s Day, the Sustainable Stock Exchange initiative supports “Ring the Bell” events to raise awareness of the pivotal role the private sector can play in advancing gender equality to achieve the UN’s Sustainable Development Goal 5. Stock exchanges are uniquely positioned to influence their market in a way few other actors can.

Advancements in this space include the pioneering of new financial products aimed at supporting the empowerment of women and gender equality in corporate leadership. Some examples of these products include: 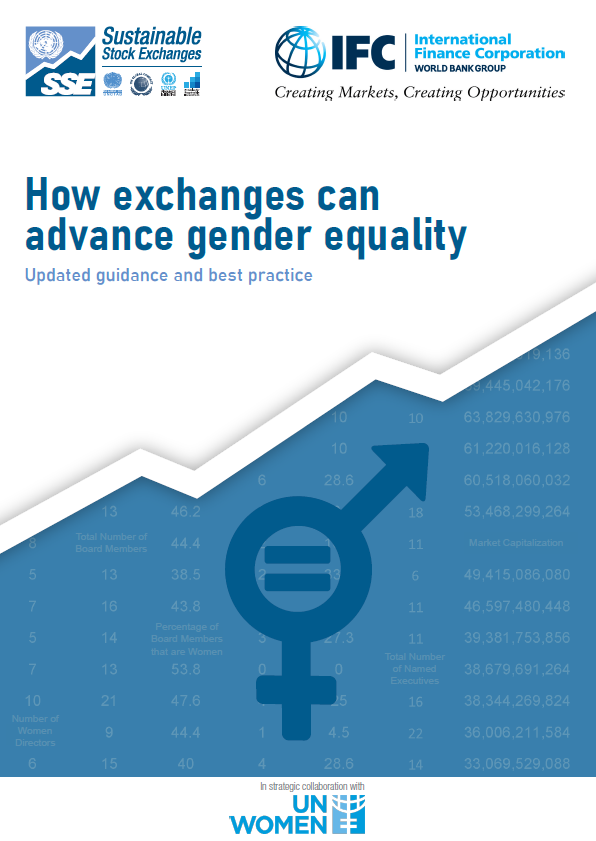 In this joint report, UN SSE and IFC identify three broad areas where exchanges can play a role in advancing gender equality, namely the promotion of gender-focused and/or gender-aware products and services, strengthening of market performance on gender equality and leading by example. This guidance was developed in strategic collaboration with UN Women and benefited from the inputs of 71 experts across 34 countries. The guidance is an updated and expanded version of the guidance the Sustainable Stock Exchanges (SSE) originally published in 2017.

The SSE guidance document on Gender Equality can be found here. 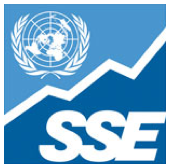 “.. IFC is pleased to contribute what we have learned to this guidance. I am grateful for our collaboration with the UN Sustainable Stock Exchanges (SSE) initiative, the SSE Advisory Group on Gender Equality, and UN Women in producing such a rich compilation of examples. The result reflects our mutual resolve to share best practices to advance gender equality for economic growth, job creation, and sustainable development that benefits everyone.”

“UN Women is pleased to partner with the Sustainable Stock Exchanges initiative and the International Finance Corporation to update the guidance note for exchanges to advance gender equality. Building on its pioneer precedent of 2017, this updated edition of the note provides an expanded range of lessons, examples, and benchmarks from across the globe — all of which have made corporations not just more equal but also more financially sustainable.”

“With this new updated guidance on gender equality, the SSE continues in its tradition of providing exchanges with practical tools to make a difference in their market. As this report demonstrates, every exchange, regardless of where in the world it operates, can do something to promote gender equality and the achievement of the sustainable development goals.”

“We will work with various market players to ensure highest levels of gender parity are upheld in line with our commitment to the Women Empowerment Principles.”

“The stock exchange can play a key role in promoting women’s economic empowerment in the private sector through addressing gender equality in listed companies, and ensuring enhanced access to finance for women entrepreneurs.“

“It was time to join our forces and come together to emphasize our commitment to gender equality and sustainable development in the finance industry also in our Nordic-Baltic region. Nordic countries are often seen as global front-runners in advancing equality, but there is still more to do. We need more actions and openness to improve diversity in top management and transparency on gender policies, practices and attitudes”